FESTIVALS AND TRADITIONS OF CAGLIARI

Religion in Cagliari is deeply felt. The procession of Sant’Efisio, held on May 1st to honour a solemn vow made four centuries ago, involves the whole city and the faithful from throughout the island. The rites of Easter Week, culminating with the joyous and moving S’Incontru (The Meeting), take the old historic quarters back in time. In the museum of the Sanctuary of Bonaria dozens of ex voto paintings give thanks to the Virgin for her protection in times of danger, both on land and sea. There are also festivals not linked to the religious calendar, such as the Fishermen’s Feast, held in September in the hamlet of Giorgino, where thousands of visitors are offered exquisite traditional fish dishes. 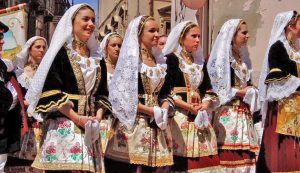 Cagliari has many historic churches that are worth a visit. The city is particularly devout to the Sanctuary of Bonaria, dedicated to the Virgin protectress of mariners. Consisting of an ancient church with a convent and the more modern basilica, it houses a statue of the Virgin which arrived miraculously from the sea. And this is where the Popes visiting Sardinia celebrate Mass. Not far away is the Early Christian Basilica of San Saturnino. In the Stampace quarter stands the small church of Sant’Efisio, and just a few feet away the underground crypts of Sant’Efisio and Santa Restituta, carved out of the limestone rock, where, according to legend, the Saints were imprisoned.

THE FESTIVAL OF SANT’EFISIO

This is the greatest religious festival in Sardinia, involving the whole island. It is a long procession which snakes its way through the city and environs on several days with various stops. It begins on May 1st and ends on May 4th with the return of the statue to the church. The Saint’s statue is borne on a gilded carriage drawn by a yoke of huge oxen decked with flowers, and follows the route of his martyrdom.

It reaches the small church on the beach of Nora, where the Saint was martyred. The first part of the procession takes place in Cagliari, in the morning, and passes through two lines of a huge crowd. It sets off from the Saint’s small church in the Stampace quarter and follows a circuitous route to allow everyone to admire the procession. The Saint’s carriage is preceded by representatives from all the towns and villages of Sardinia, in their traditional costumes and parading on foot, on horseback or on the traccas, ox-drawn carts decorated with flowers.

Book one of the Scopri Cagliari e-bike tours itineraries.

Do you need a Guesthouse in Cagliari?