The artwork and collections on display in Cagliari cover a very long time span reaching right to our days. At the farthest end of this timeline are the Archaeological Museum findings, including Neolithic stone statuettes of stylised geometrical female figures. But Cagliari also has fascinating modern artwork: in the porticoes of the Regional Assembly’s building in Via Roma stand the stone sculptures of Costantino Nivola, while the City’s two largest collections of 20th-century art are housed in the Municipal Art Gallery. Temporary exhibitions and shows are hosted by the city’s several cultural venues: Lazzaretto at Sant’Elia, the Ghetto and the Former Town Hall (Palazzo di Città) in Castello and the Castle of San Michele. All important historical buildings, fitting scenarios for the works on show. 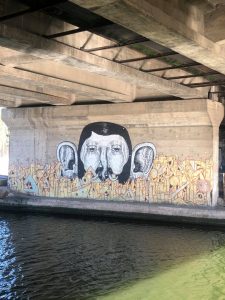 The Municipal Art Gallery and the Public Gardens

The gallery houses the Ingrao Collection, with about 500 works by Italian artists from the 19th and 20th centuries such as Balla, Boccioni, Sironi, Depero. Other rooms host the collections of 20th-century artists from Sardinia, including outstanding figures such as Ciusa, Dessy, Figari, Nivola and Sciola. It stands at the end of the beautiful Public Gardens, of Neo-Classic Design with contemporary artworks such as I Dormienti by Mimmo Paladino and the big triangle by Mauro Staccioli. www.museicivicicagliari.it

Cagliari has several cultural centres hosted in former civic buildings carefully restored and given a new lease of life.

Lazzaretto is close to the sea in the Sant’Elia quarter where in past centuries sea travellers landing in Cagliari had to be quarantined.

The so-called Il Ghetto, on the Bastion of Santa Croce was actually a military barracks, built in a place once occupied by the synagogue.

Exmà is the city’s ancient slaughterhouse.

MEM, the Media library of the Mediterranean, which houses two libraries, the City’s Historical Archive and the Sardinian Film Library, is housed in a former food market.

SEARCH, in the semi-basement of the City Hall, houses the City’s Historical Archives, with exhibitions on Cagliari’s history

The Castle of San Michele, while preserving the outward appearance of a massive Medieval fortification is now home to art exhibitions and collections of engravings.

Via San Saturnino is a narrow pedestrian street in the Villanova quarter, adjoining the tree-lined Terrapieno promenade. Local graffiti artists have turned it into a colourful open-air canvas, a true gallery of this modern-day art form.