What to see on the second day

HERE ARE SOME IDEAS ON WHAT YOU SHOULD DEFINITELY SEE

San Benedetto food market. Early morning (closed on Sundays) is the best time to visit the city’s main food market, a treasure trove featuring the best produce of Sardinia. The lower floor is occupied by a large fish market. Right outside the market more vendor stalls, shops and bars – the ideal place for breakfast or a delicious snack. 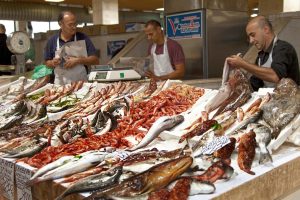 Early Christian Basilica of San Saturnino. One of the oldest churches in Cagliari (5th – 6th centuries AD). It hosts concerts or cultural events and is surrounded by a small archaeological area consisting of an Early Christian necropolis.

Bonaria: the Hill, the Basilica, the Park, the Museum.

At the top of the Bonaria hill stands the Sanctuary and the Basilica of Nostra Signora di Bonaria, the Patron Saint of sailors, featuring a much revered ancient statue of the Virgin, which portentously landed on the nearby shore. It gave the name to the Argentine city of Buenos Aires. Don’t miss a visit to the small museum, in the adjoining convent cloister: a fascinating collection of historic objects, model ships and ex voto offerings, the simple paintings by which sailors thanked the Virgin for saving them from storms and shipwrecks. Around the Basilica lies a park with early Christian churches cut out of the rock.

Two fantastic places for having lunch: Calamosca, a sandy cove flanked by the rocky headland of Sant’Elia or Marina Piccola at the foot of the promontory Sella del Diavolo. Both these beautiful spots are in town. You can reach them by public bus and both have restaurants and bars.

Just below the Church of Sant’Eulalia, in the Marina district, you can visit an underground archaeological area, consisting of the ruins of the ancient Roman city.

MEM, Mediateca del Mediterraneo. Originally one of the city’s markets, it has recently been entirely renovated and turned into a cultural centre, with libraries and a media library. The glassroofed gallery furnished with tables and chairs is a lively environment, frequented by students, who come here to study and by people of all ages who come to meet for a drink.