ART AND HISTORY OF CAGLIARI

Cagliari, founded by the Phoenicians, over time was seized in turn by the Carthaginians, the Romans, the Vandals and the Byzantines. In the Middle Ages, it became the capital of one of the four Giudicati before more invading armies landed on the island’s shores: Pisans, Aragonese, Spanish, Piedmontese up until the unification of Italy. The layers of history and art left by these events and peoples are engraved on the city. The Tuvixeddu hill is famous for the most extensive Punic necropolis in the Mediterranean. The Roman age has left the Amphitheatre, the Viper’s Cave, the ruins of houses such as the Villa di Tigellio, and the archaeological area beneath the Church of Sant’Eulalia. Lastly, don’t miss the Archaeological Museum, in the Cittadella dei Musei, for a fascinating journey through the ancient history of Sardinia. 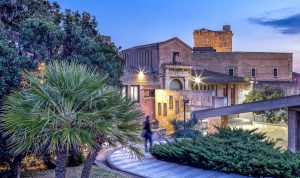 This museum complex is home to some of the city’s main collections. The star attraction is the Archaeological Museum, with findings from all over Sardinia, with a timeline running from the New Stone Age to the fall of the Roman Empire. Don’t miss the bronze statuettes of the Nuraghic civilisation.

In the citadel, we also find the National Art Gallery, with precious altar paintings from various Sardinian churches and the Museum of Siamese Art, a collection of artwork and traditional weapons from the Far East. Open every day except Mondays.

The bronze statuettes depict in careful detail the men and women of the Nuraghic civilisation: mothers, warriors, wrestlers and priests.

The Punic Necropolis of Tuvixeddu

Tuvixeddu is a vast Punic necropolis, covering a whole hill. Hundreds of tombs dug into the rock over several centuries. Nowhere else in the Mediterranean, not even at Carthage itself, has such a vast burial ground been found. It can be accessed only on some special occasions, such as the annual heritage event Monumenti Aperti.

The Roman period: the Amphitheatreo
This is one of the few Roman Amphitheatres partly built of masonry and half dug into the rock. The masonry portions have long since disappeared. It is currently undergoing restoration works.

The Pisan period: The Pulpit of Maestro Guglielmo

It is housed in the Cathedral, in the Castello quarter. Its exquisite high-relief marble panels give it an outstanding place in Italy’s art history. Crafted in the 12th century, it originally stood in the Cathedral of Pisa, but in the 13th century it was transferred to Cagliari to mark the ties with the Tuscan city.

The Aragonese and Spanish periods: the Cloister of San Domenico
The cloister, in the Villanova quarter, was built in white limestone in the Catalan-Gothic style in the 15th century. The cloister and crypt are all that is left of the ancient Church, razed by the 1943 air raids and later replaced by a modern-style church.

Up until the 1800s, Cagliari was protected by walls on the seaward side too. In the early 20th century, a new City Hall right in front of the harbour was built, ideally opening up the city to the Mediterranean. It is built in Neo-Gothic and Art Nouveau style.